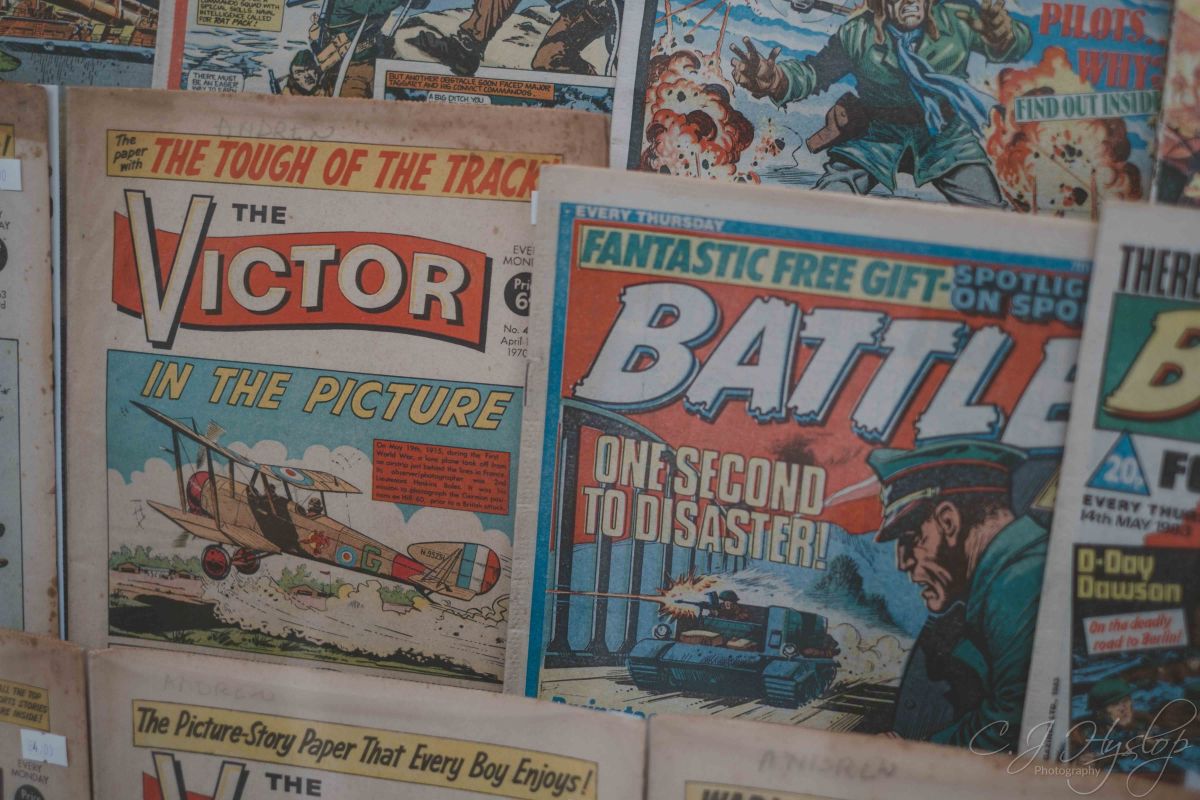 Leaving history behind more or less, we had a wander around the modern (ish) town centre, though that still had a lot of tudor buildings around the square. Some random shots were taken along the way.

Phil got to re-visit his boyhood.

I think that will do for now.  All the photos are embiggenable if you click on them to see them better.

The main recreational park in Shrewsbury is called The Quarry. Created in 1719 and encompassing 29 acres it’s in a location within easy walking distance of Shrewsbury town centre, Shrewsbury Sixth Form College and Shrewsbury School, it is the most heavily used public park within the county. Who knew that measuring park usage is a thing?? Is someone in every park in Shropshire sitting counting how many people are there all day, every day? Well anyway, the centrepiece of the Quarry is called The Dingle, a former stone quarry, but now a landscaped sunken garden.

I think only my British readers will recognise the name of Percy Thrower (MBE) who was a gardener, horticulturalist and broadcaster He became nationally known through presenting gardening programmes, starting in 1956 with the BBC’s Gardening Club, then the BBC’s Gardeners’ World from 1969 until 1976. His final career move was to Shrewsbury in 1946, as the Parks Superintendent, becoming the youngest parks superintendent. He had a staff of about 35. He had reached the top of his profession at just 32 years of age and it was his sole ambition in life. He expected to stay only four or five years, but in fact remained in post until 1974.

The Shoemakers’ Arbour associated with the pre-Victorian town festival, and originally sited in Kingsland, was moved to the Dingle in 1879. It dates from 1679 and includes statues of Crispin and Crispinian, the patron saints of shoemakers.

A statue of the goddess Sabrina was presented by the Earl of Bradford in 1879. The inscription on the statue is based on a poem by John Milton (1608–1674). In myth, Sabrina was a nymph who drowned in the Severn.

Shrewsbury’s main civic war memorial, the focus for Remembrance Sunday, is situated within the Quarry. near St Chad’s Terrace. It consists of a bronze winged and armoured statue of St. Michael under a canopy designed like a classical Greek temple in the form of six Ionic columns supporting a circular dome. It is inscribed: ‘Remember the gallant men and women of Shropshire who gave their lives for God, King and country 1914-18 and 1939–45.

St Chad’s Church was built in 1792, and with its distinctive round shape and high tower, it is a well-known landmark in the town. It faces The Quarry area of parkland, which slopes down to the River Severn. The church is a Grade I listed building. The River Severn (Welsh: Afon Hafren, Latin: Sabrina) is the longest river in Great Britain at a length of 220 miles (354 km), and the second longest in the British Isles after the River Shannon in Ireland.

Stay tooned, see you next week! 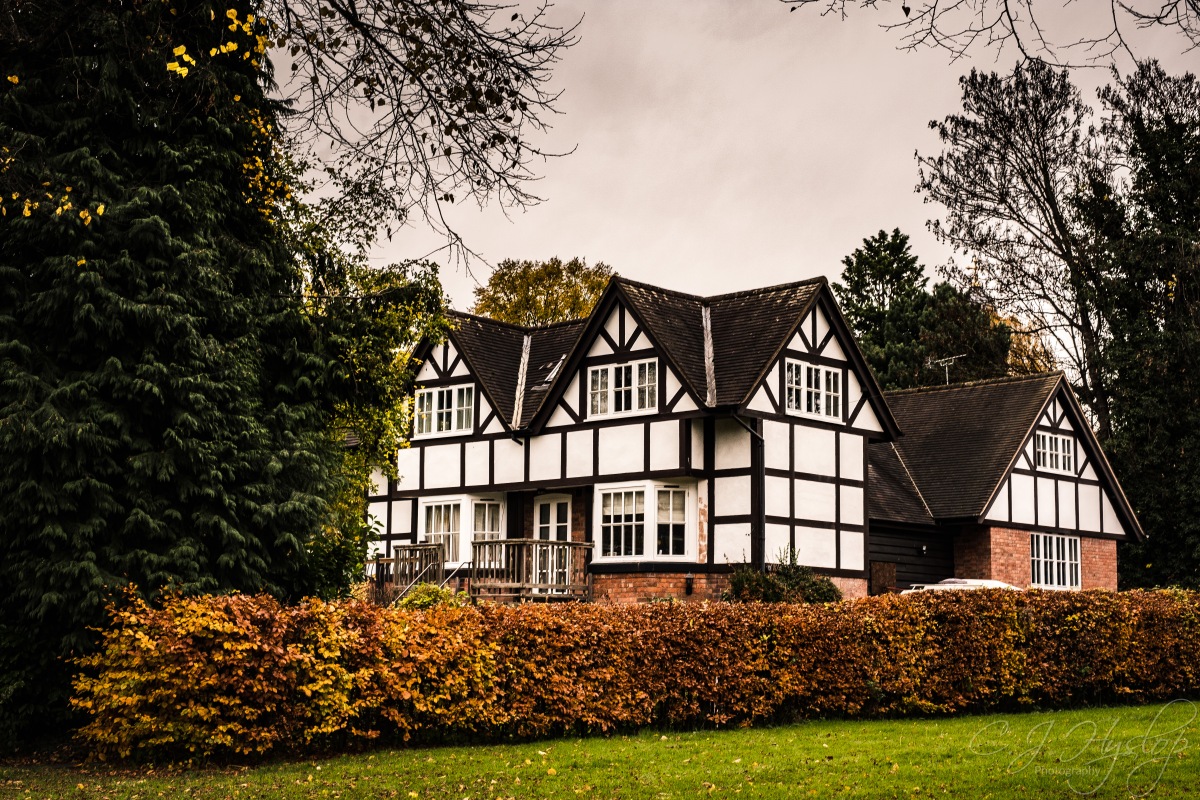 Today we are going to look at some of the listed buildings in Shrewsbury, most built between the late 14th and late 16th centuries.

Some shots now from the Rollei SL35 with a roll of Kodak Portra in it.

Stay tooned, we’re not done yet 🙂 A little break from our North Eastern adventures, as Phil and I went off to Shrewsbury to a model show Phil wanted to attend, and we took an extra day there for me to wander around Shrewsbury and take some photos of course.

Shrewsbury is a market town, on the River Severn, 9 miles from the border with Wales.It has a largely unspoilt medieval street plan and over 660 listed buildings, including several examples of timber framing from the 15th and 16th centuries, so I knew it would be a fab place to photograph.

Originally the capital of The Kingdom of Powys in the early middle ages, it has been the site of many conflicts between the English and Welsh, with The Angles, under King Offa of Mercia taking possession in 778.  William the Conqueror held off the Welsh hordes who besieged the town in 1069 and 5 years later William gave the town as a gift to Roger de Montgomery who built the castle in Shrewsbury.  Between 1135 and 1153 a civil war raged in England and Normandy, known as The Anarchy, by which time Empress Maud, who wanted to rule England, had installed her own man in the castle at Shrewsbury, William FitzAlan, a nobleman of Breton ancestry. He was a major landowner, a Marcher lord with large holdings in Shropshire, where he was the Lord of Oswestry, as well as in Norfolk and Sussex. However, King Stephen put paid to that as he had already claimed the throne and successfully besieged the castle during the war.

It was in the late Middle Ages (14th and 15th centuries) when the town was at its height of commercial importance. This success was mainly due to wool production, a major industry at the time, and the wool trade with the rest of Britain and Europe, with the River Severn and Watling Street acting as trading routes.

In the spring of 1349, The Black Death plague arrived and took a high toll on the population of Shrewsbury. Records suggest it was devastating. Examining the number of local church benefices falling vacant due to death, 1349 alone saw twice the vacancies as the previous ten years combined, suggesting a high death toll in Shrewsbury.

In 1403 the Battle of Shrewsbury was fought a few miles north of the town centre, at Battlefield; it was fought between King Henry IV and Henry Hotspur Percy, with the King emerging victorious, an event celebrated in William Shakespeare’s Henry IV, Part 1, Act 5.

Well, that will do for historical bits, though of course, the town’s history is much more extensive.

We stayed in College Hill Guest House just outside the town centre, it’s a 16th-century dwelling.  Everything was higgledy-piggledy, the floors creaked with every step, the stairs and walls leaned, but you could feel the history.

We made ourselves at home 🙂

So let’s have a wander around.

We came across this rather magnificent terracotta and red brick building

An Eye, ear and throat hospital opened in 1881, now converted into flats.

The next interesting edifice we came across was just around the corner.

Town Walls Tower is evidence of Shrewsbury’s history as a strategically important settlement close to the border with Wales. It formed a key part of the defensive walls that once surrounded the town and is now the last surviving example of those defences. The building of Shrewsbury’s perimeter walls is dated to 1220 and 1242. Henry III issued a royal mandate urging the men of Salop to fortify the town, and grants for building walls were made during his reign. The king visited Shrewsbury on several occasions, pursuing his campaign against the Welsh. By the 14th century, the walls had fallen derelict, and Henry IV commissioned further rebuilding. Town Walls Tower was probably added during this time when the town was at risk from attack. A map of 1575 shows the town almost fully encircled by walls featuring several similar towers. They were a means to observe land around the town and river. All gone now except this one.

But today we’re going to walk through the alleyways of Shrewsbury.