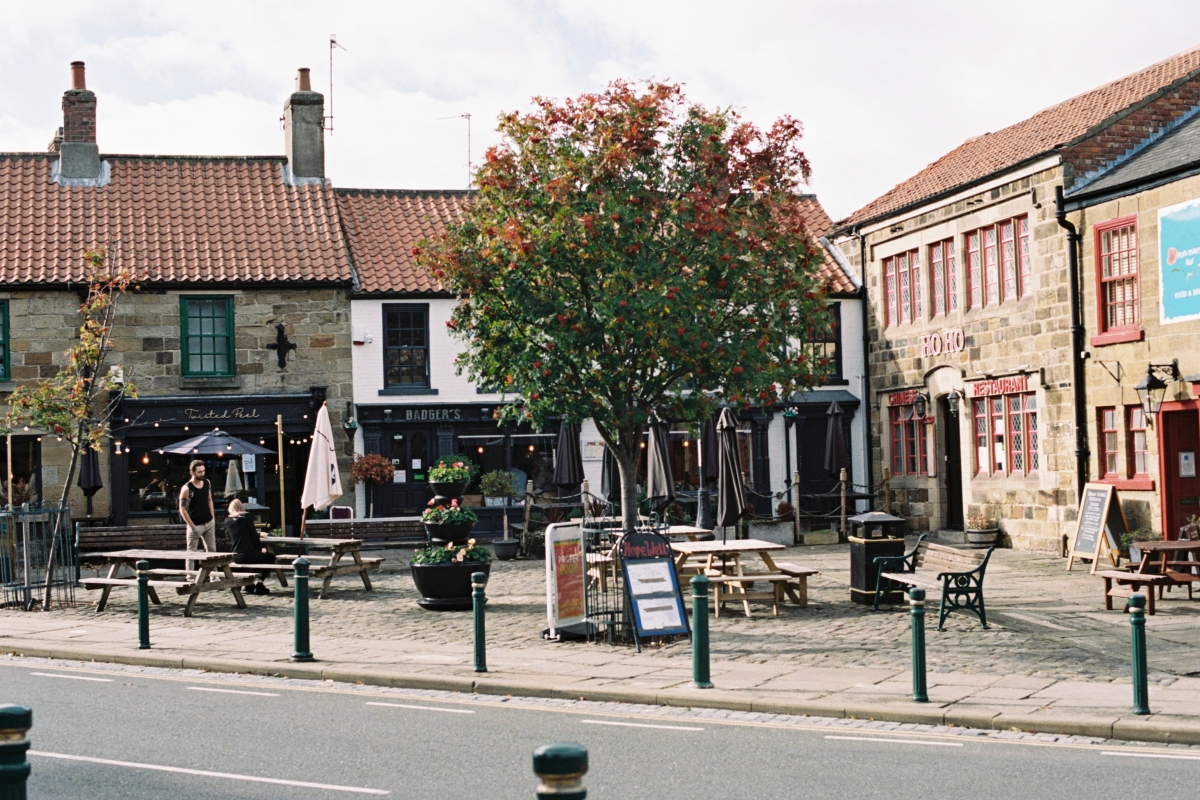 As I mentioned in PART 1 the priory was home to the De Brus family cenotaph. That has since been removed and placed in St.Nicholas Church just by the priory. After we’d been around the priory Sophie and I toddled off to the church and were hugely disappointed to find that it was closed. I think that’s a first for us, so far all our church visits have had open doors. I suppose that’s because they’re mostly rural, so no-one around much whereas St. Nicholas is in a town. So we decided instead to go to lunch and I took a few pictures on our walk to the café.

This early 18th century building was a hotel called The Buck (hence the deer on top of it’s porch) before the Solicitors moved in.

Formed in 1849 The Zetland Masonic Lodge is still going strong today. I was never sure what Freemasons are all about but learnt a fair bit from Fred and Barney 🤣

Smokin’ Joe’s cocktail bar only opens at 4pm sadly, or I’d have been in like Flynn.

We had lunch outside by what I think was a rivulet coming out from under the road and going through a channel next to a footpath, I should have taken a picture but it was a bit grim, and after a nifty panini and cappuccino went back to the car to head for the Owl Center . As I drove down the road past the church I noticed the front door was open. Luckily there were a couple of parking spaces right by the church so I quickly parked up and Sophie and I hot footed it to the church. We met a chap inside and found out he was an electrician fixing something and the church wasn’t really open. I gave him the googly sad eyes thing and explained we’d come a long way to see the cenotaph and he said we could stay a little bit to photograph it. Which was cool, but we didn’t have time to explore the church.

The De Brus Cenotaph was possibly erected by Margaret Tudor, the Queen of Scotland, to mark the 400th anniversary of the foundation of Gisborough Priory. It was erected inside the priory church in memory of the De Brus family of Annandale and Skelton. Made of marble quarried at Egglestone, it takes the form of a Renaissance altar table, with exquisitely carved sides.

The north face of the cenotaph is carved with five figures of De Brus family members from Skelton, separated by the Four Doctors from the Bible; Jerome, Gregory, Ambrose, and Augustine. In spite of a childhood where Sundays were church~school days, I can’t remember ever hearing of the four doctors. I think maybe they were Catholics and we didn’t do them. So I’ve looked them up and in early Western christianity they were not Doctors of medicine or surgery, but rather great teachers of faith. (Edit:- the Doctors were not in the bible -thanks April- so that’s why I don’t remember them!)

The south face shows five de Brus family members of Annandale, separated by the Four evangelists; Matthew, Mark, Luke, and John. I do remember them, just about.

The east end shows a prior with kneeling canons. The west end has been damaged, and I couldn’t get round to photogrpah it, but historians think it may have depicted a king, possibly King Robert Bruce of Scotland.

On the floor next to the cenotaph is a collection of medieval mosaic floor tiles found in the grounds of Guisborough Priory.

And that is the end of our day out in Guisborough. Stay tooned for wherever we go next!

(photographs taken in Guisborough with my Contax Aria loaded with Portra 400, photographs in the church taken with my fuji XT2.)