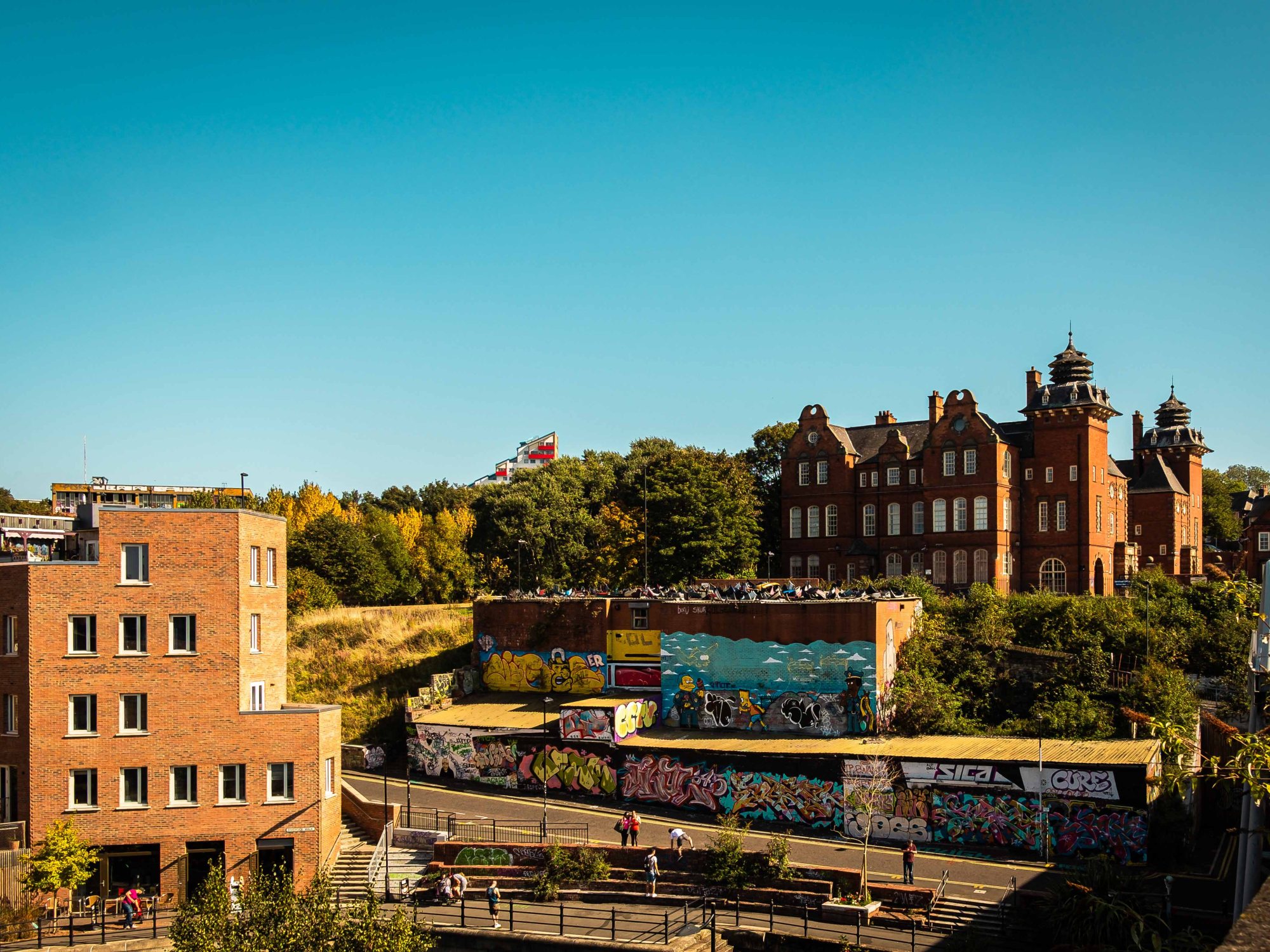 After our somewhat disappointing ‘tour’ around All Saints, Sophie and I went off to find an interesting building Sophie had spotted from a train. According to Sophie it wasn’t too far away, so we left All Saints and headed down to the quayside.

We walked down the quayside and I was amused to see that a temporary beach had been set up for summer.

You may notice an elephant in the middle of the picture, this is something that happens every year in the North East, and will have a post of it’s own next time.  In the mean time, back to our quest for the Oriental roofed building. We came across a few interesting bits and pieces along the way.

The Keel Row is a traditional Tyneside folk song evoking the life and work of the keelmen of Newcastle upon Tyne. The opening lines of the song set it in Sandgate, that part of the quayside overlooking the River Tyne to the east of the city centre where the keelmen lived and which is still overlooked by the Keelmen’s Hospital. The Keelmen of Tyne and Wear were a group of men who worked on the keels, large boats that carried the coal from the banks of both rivers to the waiting collier ships.

In 1699 the keelmen of Newcastle decided to build the Keelmen’s Hospital, a charitable foundation for sick and aged keelmen and their families. The keelmen agreed to contribute one penny a tide from the wages of each keel’s crew and Newcastle Corporation made land available in Sandgate. The hospital was completed in 1701 at a cost of £2,000. It consisted of fifty chambers giving onto a cloister enclosing a grass court. One matter of contention relating to the hospital was that the funds for its maintenance were kept in the control of the Hostmen, ( a cartel of businessmen who formed a monopoly to control the export of coal from the River Tyne) lest they be used as a strike fund by the keelmen. Nothing really changes does it? The hospital building still remains in City Road, and was used for student accommodation until recently. The building is now on the Heritage at Risk register. It has stood vacant since the closure of the student accommodation, and was added to the register in 2009.

After the decline of Newcastle as an industrial centre, in recent times this area of the river bank known as the Quayside and more specifically Sandgate at this point underwent a major redevelopment project. As part of this the Tyne and Wear Development Corporation funded a number of pieces of sculpture and public art including this one. Taking the theme from the sea and rivers the statue is of a female siren, who famously lured sailors away from their intended course. (Because of course statues make up for the loss of industry and jobs).

Just before we got to City Road we came across this derelict building.  Once a pub, the Barley Mow and then the Frog and Firkin it has lain empty since 2010, and has been hit by arson twice in the intervening years.

We kept walking along City Road, expecting Sophies building to appear around the corner, but as we got to Ouseburn there was still no sign of it! On we went.

A Former Wesleyan Mission House dating to 1867, it’s been converted into flats but retains much of its architectural integrity. The plaque on it’s wall relates to Gladstone Adams (1880 1896). Born just around the corner from the mission he attended Gosforth Academy. Adams served an apprenticeship in Tynemouth with photographer William Auty and opened his own studio in 1904. In April 1908, he drove down to Crystal Palace Park in a 1904 Darracq-Charron motorcar to see Newcastle United play against Wolverhampton Wanderers in the FA Cup final. It was such a novelty to see a car in those days that it was put into a car showroom window while he was there, because so many people wanted to see it. On the way back from the cup final, snow kept getting on the windscreen and Gladstone had to keep getting out of the car to clear it. This experience led to his invention of the windscreen wiper. In April 1911, Gladstone patented the design of a windscreen wiper with Sloan & Lloyd Barnes, patent agents of Liverpool. Gladstone’s version of the windscreen wiper was never manufactured, however. His original prototype can be seen in Newcastle’s Discovery Museum. In World War I, Adams served in the Royal Flying Corps, the forerunner of the RAF, as a photograph reconnaissance officer. One of his duties was to prove the death and then arrange the burial of Baron Manfred von Richthofen, the ‘Red Baron’, after he had been shot down and killed.

Four companies came together in 1904 to form the Tyne Tees Steam Shipping Company. These were: The Tyne Steam Shipping Co. Ltd, The Tees Union Steamship Co. Ltd, The Free Trade Wharf Co. Ltd and Furness Withy & Co. Ltd. The Tyne Tees Steam Shipping Company provided shipping services in the United Kingdom from 1904 to 1943. Two of their ships were sunk – one by torpedo in 1917 with the loss of 8 crew members and another hit a mine in 1915 with a loss of 2 of the crew.  According to the Hotel du Vin website the building has now been converted into “42 timelessly styled bedrooms, trademark bistro, intriguing Laroche tasting room, two stunning private dining rooms, Bubble bar, courtyard for alfresco dining and an outstanding wine cellar”.  A bit of posh then.

Looking over from City Road you can see The Malings, a residential development by the architects Ash Sakula on the banks of the river Ouseburn. Named after the Malings Pottery dating back to 1817, the scheme comprises 76 low energy and eco-friendly homes, with commercial units for local business and community uses. It was named “Supreme Winner” at the 2016 Housing Design Awards.

You can see this graffiti on the other side of the road behind The Malings on the yet-to-be-developed-site.

At the junction of City Road an Horatio Street, you can see the Sailers Bethel which was opened on the 12th of April 1877. Designed by the architect Thomas Oliver Junior it cost £2000 to build. This building has been used as a nonconformist chapel, a community centre, a Danish seamen’s church and now, finally, offices. The word Bethel is hebrew for House of God. In the 1800’s a lot of trade between Newcastle and Denmark occurred, resulting in cargoes of fresh meat, eggs and butter, which all arrived at the mouth of the Ouseburn river. The Bethel was where the Danish sailors stayed overnight whilst their cargo was unloaded.

It was quite a long walk to get there but eventually Sophies building appeared in front of us, easily spotted by it’s weird rooftops, which Sophie had thought of oriental design, so we were not sure what kind of building it was.

The rather flamboyant Ouseburn School on Albion Road, facing City Road was built in 1891-93 at the considerable cost of £17,000. The listed school closed in 1977 and lay empty for years until it was converted into a business development centre, providing 50 offices and workshops. Designed by F W Rich  in 1893  it is characterised by Dutch type gables, decorative moulded brickwork and pagoda-style turrets in the style of those found on Burmese Temples. It’s rumoured that industrial giants, Armstrong and Vickers, gave hefty donations towards the building as they were trying to impress the Japanese Navy who visited Tyneside with a view to buying battleships with steam generators. Hence the pagodas.

Mission accomplished and we turned back to the quayside and the centre of Newcastle. Stay tooned for part 3 when we’ll look at the elephants of Newcastle.

all pictures by me and embiggenable with a click!