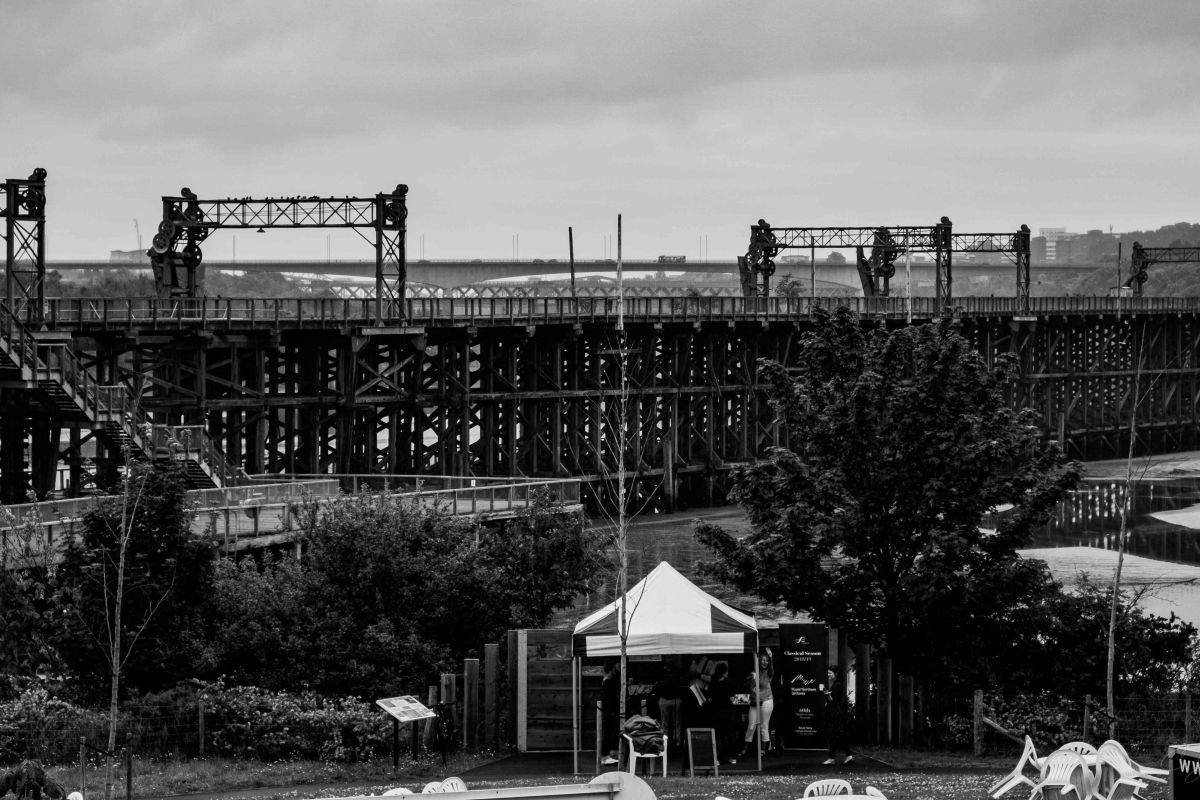 On a wet day in July Sophie and I went to the outdoor market held once a month on Dunston Staiths.

The Staiths are believed to be the largest timber structure in Europe, maybe the world, but who knows?  It is also a Grade II listed scheduled monument and is owned by registered charity Tyne and Wear Building Preservation Trust (TWBPT).  The structure is made of North American pitch pine timber, no longer available, from the once unlimited forest. Most of the timber used was 20 metres long, 14 inches deep and 14 inches wide. The total weight of timber is 3,200 tons. The Staithes are 526 metres long with 4 railway tracks, 6 loading berths (3 on each side), with two chutes to each berth.

The North East Railway Company opened the Staiths in 1893, and it’s purpose was to facilitate the loading of large quantities of coal from the Durham coal fields onto the waiting coal ships, (known as colliers) which then transported the coal to London and abroad.  At it’s peak, the coal industry  moved 5.5 million tons of coal each year from the staiths. Waggonways were used to transport the coal from the North Durham coal-fields, of which there were quite a few. The coal waggons were pushed by steam engines up the gradient, to the Staithes. It was a very skilled job to shunt the wagons onto the Staithes, as the driver worked “blind” from behind, and had to make sure they were on the right track. The men had their own signals, maybe a touch of a cap, or some other gesture, but there was nothing written down, so the driver had to depend on them. If he didn’t gauge the end of the track just right, the trucks could fall over the edge.

Once on the Staithes, and at the berths, the “teamers” and “trimmers” were waiting in the colliers to level the coal, as it came down the chutes, to keep the ship level. The empty wagons rolled back to the Railway siding by gravity. It was not a pleasant place to work, as it was noisy, oily and very, very, dirty. There were occasionally some very serious accidents, because of the poor lighting. They worked by candlelight until electricity arrived in 1930. Some of the men lost their limbs, some were crushed between the ship and the Staithes, however,  it was still considered a privilege to work there. Trimmer’s and teamer’s jobs were nearly always handed down from father to son, or some-one in the family. They were the “elite” of the Staithes, very well paid, as in 1930 they earned around £8 to £10 per week, I don’t think anyone knew how much they really earned, (not even the Tax Man).

Interesting factoid:- In 1912, a dug-out canoe was found at the West Dunston Staiths, it dated back to Neolithic times, (New Stone Age circa 5000 BC). Not sure where that ended up.

The coal industry declined at the end of the 19th century, and so too did the staiths, no longer needed, it fell into disrepair. In 1990 though, the Newcastle Garden Festival was held and extensive restoration work carried out, with the Staiths taking a leading role as a key installation with performance space and an art gallery.  But then a fire broke out in 2003 damaging the Staiths extensively, and it was put on English Heritages ‘at risk’ list. It has been subject to a few arson attacks too sadly.  Somehow the TWBPT raised the funds to recommence the restoration, which is still ongoing, and the Staiths is once more a visitor attracton, with a Saturday Market open once a month on a Saturday, which is when we visited.

So on with the show!

Firstly, on the menu..

who doesn’t love a Carpathian sausage?? 🙂

The structure is quite amazing

We went topside to see what the view was like. Looking back towards Newcastle the fire damage was evident and that part was cordoned off.

Looking the other way, a sea fret was rolling up the river It passed over, we got wet and then we got a better view.

It was a good spot for people watching

and it was a perfect day for umbrellas

We didn’t stay very long as the weather just kept getting worse, but did go and visit St James Cemetary nearby in the afternoon, which has some interesting gravestones. So stay tooned for that 🙂

all pictures by moi and you can embiggen them with a click.

Some more fascinating images of it  HERE   🙂