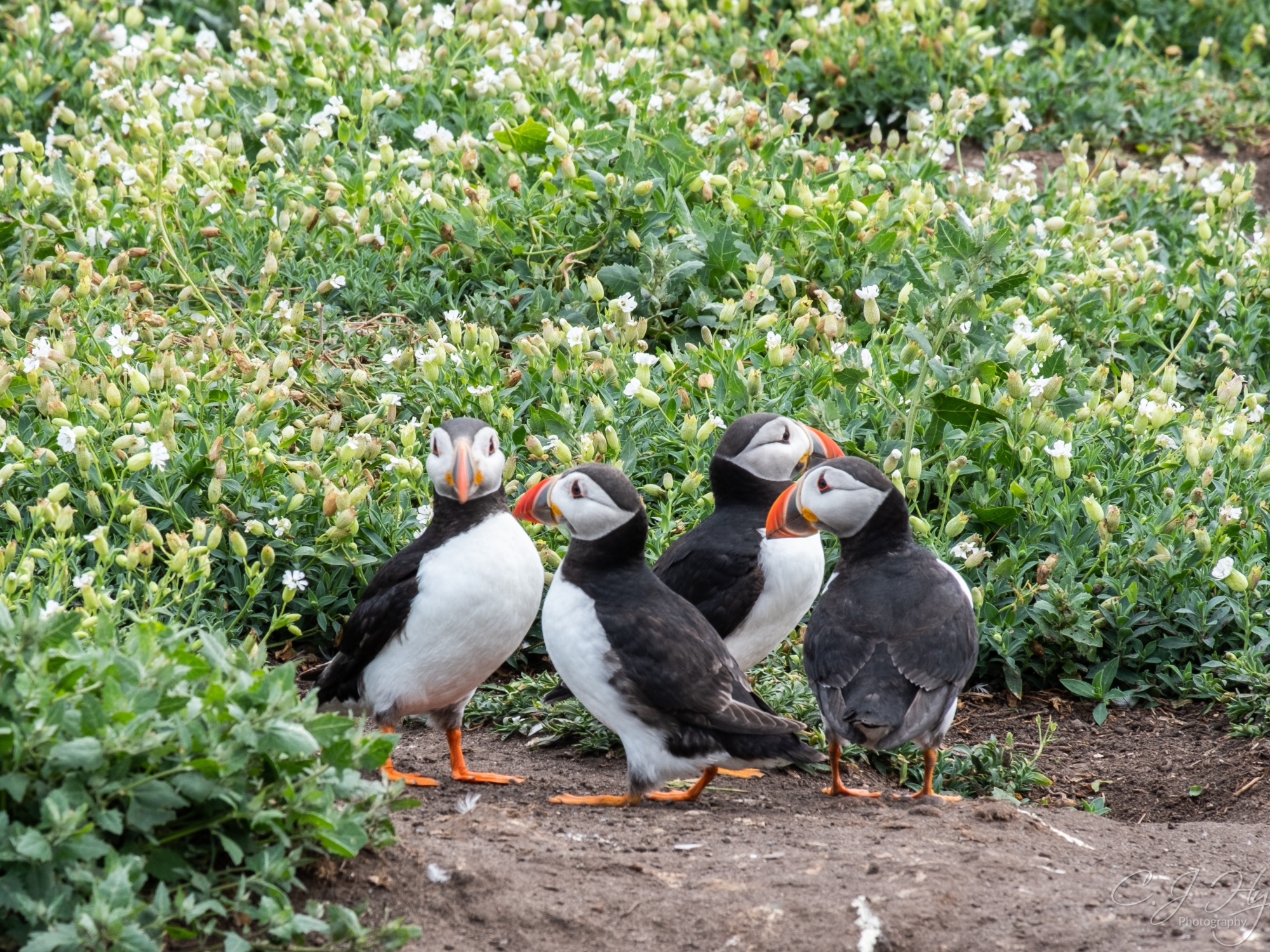 Puffins!!  This is the main reason we go to the Farne Islands, to see the huge colony of  puffins that come here to breed and we try to get some in-flight shots, which are SO difficult because the buggers fly at supersonic speed! There are 3 types of Puffins but here in the UK we get the Atlantic Puffins.

Puffins form long-term pair bonds or relationships. The female lays a single egg, and both parents incubate the egg and feed the chick (or “puffling”).

The Dads dig out the nests, or use rabbit burrows if there are any about.
Puffins eat both fish and zooplankton but feed their chicks primarily with small marine fish several times a day. The prey species of the Atlantic puffin include sandeel, herring and capelin. They also have the ability to hold several (sometimes over a dozen) small fish at a time, crosswise in their bill, rather than regurgitating swallowed fish. This allows them to forage far wider than your bog-standard one-fish-at-a-time sea bird, as they bring back much more food in one go. And I think it’s much more pleasant than vomitting up into your chicks gob!

Puffins are hunted for eggs, feathers and meat. Atlantic puffin populations drastically declined due to habitat destruction and exploitation during the 19th century and early 20th century. They continue to be hunted in Iceland and the Faroe Islands. In fact  the Atlantic puffin forms part of the national diet in Iceland, where the species does not have legal protection. Puffins are hunted by a technique called “sky fishing”, which involves catching the puffins in a big net as they dive into the sea.
Their meat is commonly featured on hotel menus. The fresh heart of a puffin is eaten raw as a traditional Icelandic delicacy- seriously guys??   On the small Icelandic island of Grimsey as many as 200 puffins can be caught in a single morning

Puffin populations are in decline.  Puffin records on the Northumberland coast archipelago date back to 1939 when 3,000 breeding pairs were recorded, and every census until 2008 showed a steady increase in pairs. But in 2008 numbers fell by a third, from 55,674 to 36,835. This is thought largely due to the impacts of climate change.

Erpur Snær Hansen, director of ecological research at the South Iceland Nature Centre, says  if surface sea temperatures remain at current levels or higher, the entire puffin population of south and west Iceland will disappear in the next 10 to 20 years.  Maybe if they didn’t eat so many…

Although the puffins are noisy and shouty at their breeding colonies, they are silent at sea. They fly relatively high above the water, typically 10 m (33 ft) as compared with the 1.6 m (5.2 ft) of other birds.

Next time we’ll look at some of the other inhabitants on Inner Farne, but here’s a few more puffin pictures until then..