Prior to the introduction of number plates there was the Locomotive and Highways Act 1896, which contributed to the rise in popularity for motor vehicles. The Act increased the speed limit and introduced compulsory lights for safety, but more relevantly it required vehicles to be registered by the local council. Even such ideas like driving on the left side of the road was introduced in the Act. After the turn of the century the number of vehicles on the road reached 5,000. While today this seems a low figure it was quite scary at the time. The Motor Car Act 1903 was introduced as a result. The Act was intended to help identify vehicles and their drivers, and it did this by mandating the display of registration marks in a prominent position.
The first registration marks were made up of one letter and one number. The first, A1, was issued by London County Council in 1903. This style continued until all possible combinations ran out. At this point the format changed to two letters and up to four numbers.
Besides a 1909 Act which introduced road tax to fund road improvements, the Roads Act 1920 was the biggest change in quite some time. This new act changed the registration process so that Councils had to register all vehicles at the time of licensing, assigning a separate number to each vehicle. Different councils were allowed different characters for their licensing. For example, number plates starting KA were exclusive to Liverpool.
The problem with this way or registration is that more populous areas ran out of possible marks quicker than other areas. In the case of Liverpool the KA series ran out by 1927, but the SJ series issued by Bute Council lasted until 1963. Areas that did run out of plates though received new formats – three letters and three numbers – and later a reversed format (three numbers and three letters). Even these would run out though; something needed to be done. In 1963 a new format was introduced, known as suffix registration marks. These displayed three letters, up to three numbers, and then the letter A. This meant any vehicle registered in 1963 would have an A on the end. The following year the last letter was changed to a B, so any vehicle registered in 1964 would end in a B. This pattern continued until 1983 when the format was reversed (the prefix format) and the first letter became the year of registration. In September 2001, the current format number plate was introduced, made up of three parts:
1)Local memory tag The first two letters show where the vehicle was registered. The first represents the region and the second a DVLA local office.
2)Age identifier The two numbers in the middle show the age of the vehicle down to a six month period – March to August or September to February. The age identifier changes on 1 March and 1 September.
3)Random letters The last three letters are random and give the car a unique identity.
Under rules introduced in April 2009, drivers in England, Scotland and Wales can display the Union flag, Cross of St George, Saltire or Red Dragon of Wales.
No other symbols or flags can be displayed on number plates.

(info from National Numbers, and The AA)

This is really boring in comparison to the USA.

One from my time in USA, much cooler than ours. 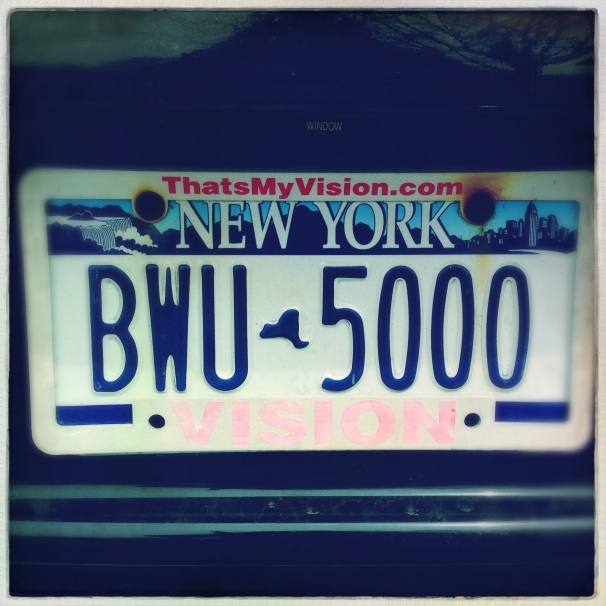