We went up to Edinburgh on Friday to go to the Scale Scotland Model show at the Hilton near the airport, Phil was displaying his models and also judging in the competition.  We stayed overnight in a Travelodge and went out with 2 modelling chums Lester & Steve for dinner and a few sherbets at the nearby Weatherspoons. We had a fab time, laughed most of Friday night and had a great day at the show on the Saturday. I’ve taken lots of model photo’s for our clubs Facebook page but was hard pushed to do my 366.  I managed though of course.

The Great Britain road numbering scheme is a numbering scheme used to classify and identify all roads in Great Britain.
Each road is given a single letter, which represents the road’s category, and a subsequent number, of 1 to 4 digits. Introduced to arrange funding allocations, the numbers soon became used on maps and as a method of navigation. Two sub-schemes exist: one for motorways, and another for non-motorway roads.
The scheme applies only to England, Scotland and Wales. Similar systems are used, though, in Northern Ireland (see Roads in Northern Ireland), the Isle of Man (see Roads in the Isle of Man), Jersey, Guernsey, and British overseas territories. All of these numbering schemes use identical basic conventions and road-sign designs

Travelodge Hotels Limited is a private company operating in the hotels and hospitality industry throughout the United Kingdom. Branded simply as Travelodge, it is the second largest in the budget hotel sector (behind Premier Inn) and third biggest hotel chain in the UK by number of bedrooms (31,600 at the end of 2010).

in 2006 the BBC Watchdog programme highlighted Travelodge’s policy of overbooking their hotels, turning guests away even when they have booked against a credit card. When a whistleblower revealed that overbooking comes before anything else, Travelodge admitted to this practice and updated their website to confirm this. Guests who are found in this position are where possible found accommodation in a nearby Travelodge at no extra cost to them, but if no rooms are available nearby the reservation is cancelled and the customer is refunded to the payee’s card. Travelodge say that overbooking is so more guests can make use of rooms that would otherwise be empty; however, the whistleblower programme contained footage of an internal Travelodge training video which stated that their business model required them to run all their hotels at maximum capacity, and that a ‘last man standing’ policy would ensure this always occurred.

In 2007, media around the world reported that David and Jean Davidson, a retired couple originally from Sheffield, had stayed at Travelodges in Newark, Worksop and Grantham for a combined total of 22 years, making each lodge their home.The retired naval sailor and his wheelchair-using wife found the cost of their stay comparable with living in a house, but with the benefits of housekeeping service and without added costs such as council tax and utilities. Following their departure, at least one lodge named their room “The Davidson Suite”.

Had to stay in one this weekend

basic but comfortable. Would kill myself rather than stay for 22 years!!!

The 35 mm format, or simply 35 mm, is the common name for the 36×24 mm film format or image sensor format used in photography. It has an aspect ratio of 3:2, and a diagonal measurement of approximately 43 mm. It has been employed in countless photographic applications including rangefinder cameras (film and digital), mirrorless digital cameras, digital SLRs, point-and-shoot film cameras, and disposable film cameras.

The format originated with Oskar Barnack and his introduction of the Leica camera in the 1920s.Thus it is sometimes called the Leica format or Barnack format. The name 35 mm originates with the total width of the 135 film, the perforated cartridge film which was the primary medium of the format prior to the invention of the full frame DSLR. The term 135 format remains in use. In digital photography, the format has come to be known as full frame, FF or FX, the latter invented as a trade mark of Nikon. Historically the 35 mm format was sometimes called miniature format or small format, terms meant to distinguish it from the medium and large formats.

The Minolta here, sadly no longer working, was the first proper camera I had, it was lush! 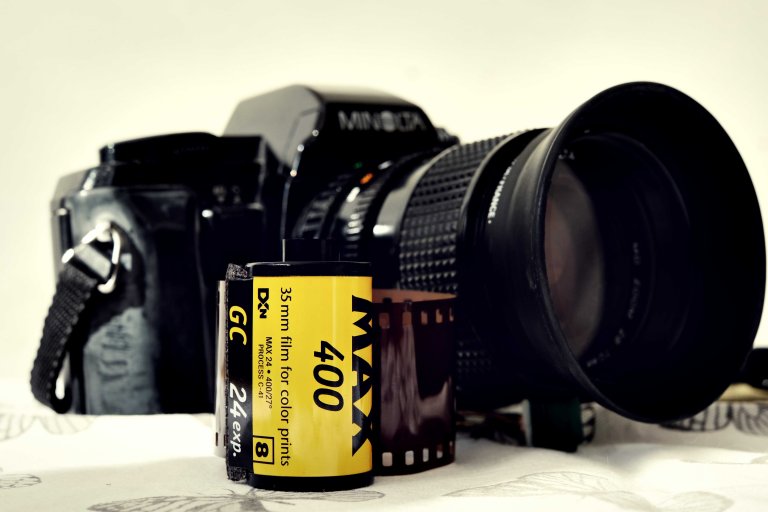